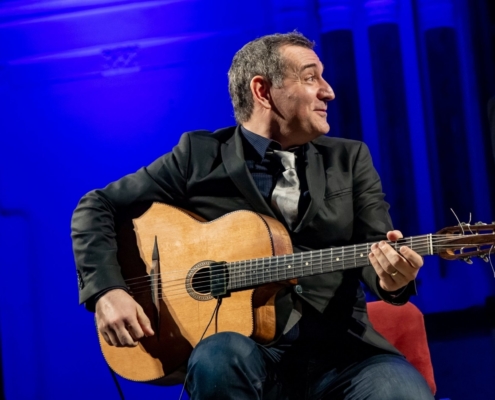 Daniel “Asseo” Beja a French Guitarist, specialized for 20 years in playing the gypsy swing music from the time of Django Reinhardt’s « Hot Club de France », more modern jazz tune and also his own compositions… His playing is influenced by those different periods of jazz, a traditionnal style mixed with a passion for world music and modern touch…
He played in several French bands and did hundreds of concerts in France and around the world (Mexico, Sri Lanka, Spain, Turkey, Maroco, Tunisia, England, Romania, Hungary, Croatia, Serbia, Switzerland etc.) with his world/jazz band « La Palinka », playing his own compositions ( https://www.lapalinka.com – 3 albums). 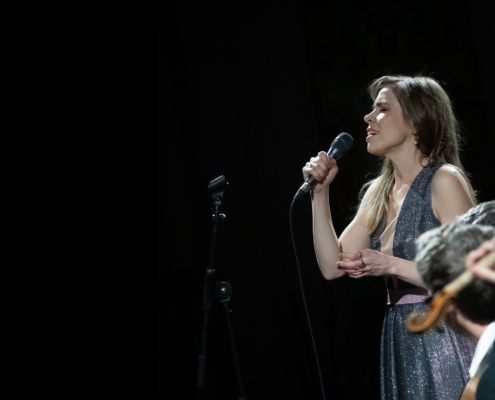 Ana Stayer was always surrounded by music and from an early age she began to sing traditional songs and to study classical violin at the music school. She continued her studies of viola at Royal College of music in Stockholm, Sweden. At the same time, she also attends lyrical singing (il bel canto) classes with professor Kerstin Viberg at the same academy in Stockholm. Her warm and powerful voice, inherited from her mother, enabled her to become a member of the renowned chior from Paris «Gospel pour 100 voix», touring France and Europe in hundreds of concerts in Germany, Belgium, Switzerland and France (among others, at the Bercy arena in Paris which seats 20,000 people) . As a vocal soloist, she has performed many times with talented gypsy jazz musicians in France, England, as well as in Morocco – in Tangers, at the TanJazz festival. She is also preparing a new project in which she brings the traditional songs from the Balkans in a minimalist, simple and honest way, conveying her deepest human feelings and creating a special sound environment.  https://www.anastayer.com 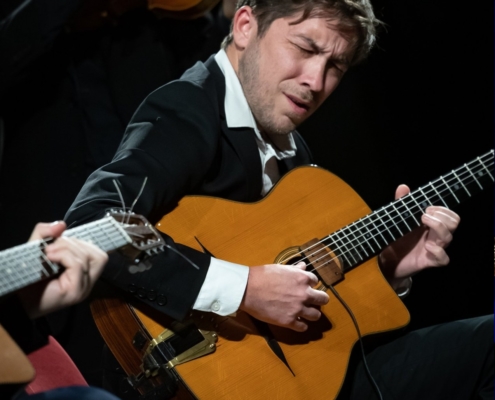 Guillaume Juhel started to play music at 14 years old in Paris suburbs and discovered the Django’s Reinhardt gypsy jazz in 2002. Totally passionnated he dedicated his activity to study this style.
Within the years he played with several musician as Didier Lockwood, Angelo Debarre, Thomas Dutronc etc.
Meeting Zaz in 2009 he started touring with her and in 2017 Guillaume decided to do his own band: Gipsy Traffic, mixing the styles between the gypsy jazz tradition and more actual music with passion and virtuosity… 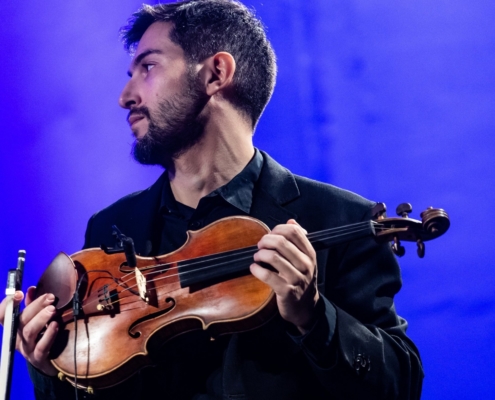 Matteo Gallus is born in Sardaigne and grew up between France and Italia. He started studying violin in his young age and got his classical diploma at the Cagliari Conservatory. Passionated by all styles of music, he started playing with several bands and studying jazz. Coming back to France, he graduated the Didier Lockwood school in France in 2010 and started playing with very activ bands in Paris like Swing Deluxe, JellyRolls Combo, Polveche Trio, Palinka 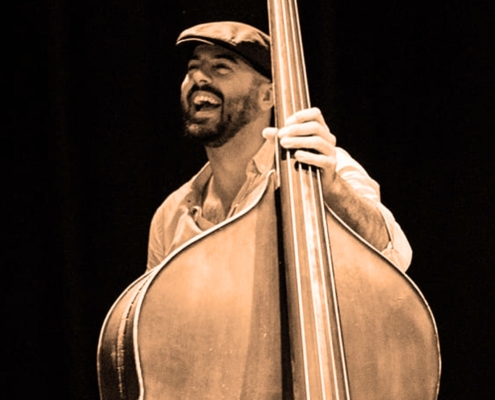 Maurizio Congiu approaches the music at the age of 13 learning to play the guitar first, then the drums that he will later leave to devote himself completely to the study of the double bass. He graduated in Classical Double Bass at the Cagliari Conservatory in Sardinia(Italy).
He took part in various stages of jazz music led by the internationally renowned trumpeter Paolo Fresu where he won a
scholarship as the best double bass student in 2008. He left Italy to strengthen his studies in Paris, attending the CMDL High Culture Institute and devoting himself completely to Jazz.
He is currently part of the vast Parisian musical reality that allows him to collaborate both in jazz and in world music.
He shared the stage with musicians such as: Didier Lockwood, Adrien Moignard, Isfar Sarabski, Sasha Zinger, Shahriyar Imanov, Inor Sotolongo,Oum, Paolo Fresu, Maurizio Minardi, Lynn Adib, Lukmil Perez Herrera, Fady Farah, Natasha Roger, Jessica Rock, Amar Chaoui, Illya Amar, etc